A Crushed Generation: Photography under Siege in Gaza 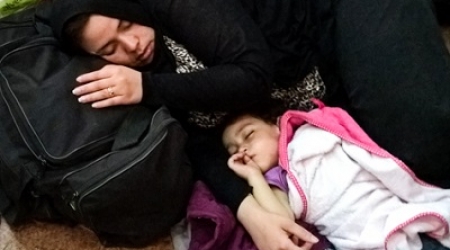 Taghreed has never been outside Gaza. Her family was exiled to the impoverished Gaza Strip when Palestine was ethnically cleansed, to make room for the state of Israel in 1948.She was born in Gaza City 30 years ago, where she dreamed of a world beyond the confines of sand, water and barbed wires. However, these dreams were to no avail. When the Al Aqsa Uprising began in 2000, Gaza was blockaded by the Israeli army on the ground as its navy patrolled the horizon. The Egyptian side of the border-crossing with Rafah was intermittently shut down. Then, Taghreed was only 15 years of age.

Gazans feed on hope and little else. Taghreed, too, learned to digest a daily dosage of hope, always telling herself that ‘tomorrow will be better.’

Then, Hamas won the elections in 2006, and soon after, the Gaza siege became progressively worse. Between 2008 and the present, Gaza was subjected to three wars that killed over 4,000 people, and wounded and maimed thousands more. Hundreds were killed during the ‘lull’ years, and more perished when Gaza hospitals faced the dismal reality of lack of medical supplies and no space.

But the physiological impact of the siege – the idea that one is perpetually trapped in a tiny stretch of land not more than 360 square kilometers in size, chased by snipers, and occasionally blown up by fighter jets – is crushing. Even Gaza’s fishermen who venture beyond few nautical miles are an open target for gunboats, from Israel and, recently, the Egyptian army.

When Egypt decided to open the Rafah border crossing (which separates it from Gaza) for two days on December 3rd and 4th, a sense of guarded relief was felt in the impoverished Strip. True, 48 hours were hardly enough for the tens of thousands of patients, students and other travelers to leave or return to Gaza, but the idea that a respite was on its way helped to break, albeit slightly, the sense of collective captivity felt by Palestinians.

When the border shut down again on Saturday, December 5th, only 1,148 people were allowed to leave, and 561 Palestinians who remained trapped in Egypt, were allowed back home. Over 23,000 Palestinians in the Strip, who were either in urgent need of medical attention, needed to cross to their universities, needed to be reunited with their families somewhere in the world, remained trapped.
Excluding the recent two-day opening of the border, the UN Office for the Coordination of Humanitarian Affairs reported that the Rafah border was only partially open for 37 days throughout 2015. Moreover, its closure has included the shutting down of humanitarian assistance.

To cope with her confinement, Taghreed bought a camera, itself smuggled from one of the tunnels snaking underground between Gaza and Egypt. She walked the dusty streets of Gaza and began snapping endless photos. Photography allowed her to freeze certain moments in time, and escape, albeit temporarily, the physical confinement and limitations of her existence.

Last year, most of the tunnels in Gaza were either blown up or flooded. Unsurprising, for many, including Taghreed, the result of having virtually no access to the hope of simple treasures, like a camera, has resulted in depression. In fact, depression in Gaza is now endemic, to the point that such headlines as “War-ravaged Gaza Strip haunted by depression, drug addiction and suicide,” are hauntingly familiar. According to a study by the Gaza Community Mental Health Program (GCMHP), “30% of Palestinian children have developed PTSD.”

As has been the Palestinian reality for decades, things have worsened since then. The 2014 war was most destructive, and the 2015 closure of the Rafah border is the worst on record.

Palestinians speak angrily of an Israeli siege – a reality that cannot be countered by all the official Israeli hasbara and media distortions. However, the Egyptian closure of the Rafah border crossing, which has contributed to the siege is rarely discussed as a political decision first and foremost.
In a border-related agreement that was reportedly signed mid-November between Palestinian Authority President, Mahmoud Abbas and Egypt’s Abdul Fatah al-Sisi, both sides seemed genial and unperturbed about the tragedy bubbling up north of the Egyptian border.

The ‘activities’ near Rafah were intended to “secure the border,” Sisi told Abbas, according to a statement issued by the Egyptian President’s office. These activities “could never be meant to harm the Palestinian brothers in the Gaza Strip.”

The term ‘activities’ here is, of course, a reference to the demolishing of thousands of homes alongside the 12-kilometer border between Rafah in Gaza and Egypt This, in addition to the destruction and flooding of hundreds of tunnels, which have served as Gaza’s main lifeline that sustained the Strip throughout the Israeli siege during most of the last decade.

Last year, in an interview with Egypt’s ‘Al-Akbar’ newspaper, Abbas said that the destruction of the tunnels was the best solution to prevent Gazans from using the smuggling business for their own benefits. He then spoke about 1,800 Gazans becoming millionaires as a result of the tunnel trade, although no corroboration for this specific number was ever divulged.

Of course, Abbas has rarely been concerned about the rising fortunes of the alleged ‘millionaires’, because his Authority, which subsists on international handouts, is rife with them. His grievance is with Hamas, which has been regulating tunnel trade and taxing merchants for the goods they import into the Strip. Not only were the tunnels a lifeline for Gaza’s economy, the underground business helped fill a void in Hamas’ own budget, a fact that has annoyed Abbas for years.

Following Hamas’ election victory in January 2006 and the bloody clash between the new Government and Abbas’s Fatah faction, Hamas has experienced immense pressure: Israel launched three massive and deadly wars, while maintaining a strict siege; Egypt ensured the near permanent closure of its border, and Abbas continued to pay the salaries for tens of thousands of his supporters in Gaza, on the condition that they did not join the Hamas Government.

Moreover, the so-called ‘Arab Spring’, the turmoil in Egypt and the war in Syria, in particular, lessened Hamas’ chances of escaping the financial stranglehold that made governing Gaza, broken by war and fatigued by the siege, nearly unviable.

Life in Gaza became impossible, to the extent that the UN Conference on Trade and Development released a report last September warning that Gaza could become ‘uninhabitable’ in less than five years, if current economic trends continue.

But these economic trends are the result of intentional policies, mostly centered on achieving political ends. Moreover, none of these ends have been achieved after nearly a decade of experimentation. True, many have died as they waited to receive proper medical care and thousands perished in war; many of the maimed cannot acquire the basic necessity of wheelchairs, let alone prosthetics, but Israel has not managed to stop the Resistance, Egypt has quelled the rebellion in Sinai nor has Abbas regained his lost factional stronghold.

And, things are getting much worse for Gaza. The World Bank issued a report earlier this year stating that 43% of Gaza’s population are unemployed, and that unemployment among the youth has reached 60%. According to the report, these unemployment figures are the highest in the world.

When Taghreed goes on her photography spree in Gaza City, she wears her favorite black dress and checkered headscarf. She is captivated by old people for, unlike the young, frustrated by their confinement and yet unable to channel their anger and energy, the old just set outside their homes and gaze at the passerby. They watch their misery unfold, as they have for decades. This time however, their hardship is not only the work of Israel, but that of their Arab ‘brothers’ as well.