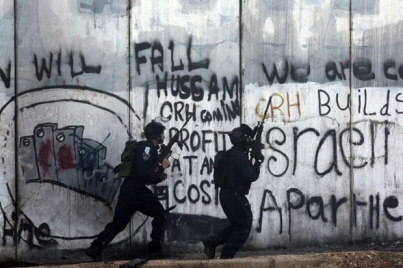 Israeli troops invaded the Qalandia refugee camp on Thursday and opened fire on youth in the street, killing one. This is the fourth Palestinian to be killed by Israeli forces on Thursday.The Palestinian killed was identified as 23-year-old Bilal Zayed, a resident of the camp.

Wisam Abu Ghweila, shot by more than 30 bullets after a car accident,
Eyad Jamal Ed’eis, 26, who was killed during an Israeli invasion of Hebron,
and Mohammad Abdul-Halim Zahran, 22, killed after allegedly stabbing and lightly wounding two security guards at an Israeli settlement.

An Israeli army spokesperson told Ma’an News Agency that Israeli forces invaded the camp with the intent of looking for a ‘wanted’ Palestinian.

The military opened fire on youth in the camp during the invasion, killing Bilal and wounding others.

Thursday’s deaths were the latest in a series of attacks by Israeli forces against Palestinians which have left 134 dead since October 1st.