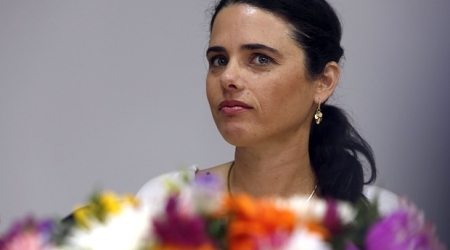 Israeli ministers have voted in favour of a bill that will crack down on human rights groups receiving funds from abroad, a move EU officials have said is reminiscent of totalitarian regimes.Opponents say the bill unfairly targets leftwing organizations critical of government policy, leaving rightwing pro-settlement groups immune from the same scrutiny, as those tend to rely on private donors – who are exempt from the measures.

The so-called transparency bill, sponsored by the justice minister, Ayelet Shaked, according to The Guardian/Al Ray, requires organizations to provide details of the countries funding their activities in any communication with elected officials, imposing a 29,000 shekel (£5,000) fine on any who fail to do so. Employees would also be required to wear special tags when working in Israel’s parliament.

The measures passed the first major legislative hurdle Sunday, when government ministers agreed to it in principal, making it almost certain to pass into law. The legislation is expected to receive support, from all the coalition factions within the Israeli government, when it is put to a final vote. It was part of a coalition agreement made by Shaked’s Hayabit Hayehudi party and Benjamin Netanyahu.

Opposition leaders have put pressure on the Israeli prime minister and coalition members to try to prevent the vote.

The EU ambassador to Israel recently met Shaked, to warn that the bill would undermine Israeli’s image as “a democratic and pluralistic country”, Israeli media reported. EU officials were quoted as saying that “Israel should be very careful about reigning in its prosperous democratic society with laws that are reminiscent of totalitarian regimes”.

Ayman Odeh, the leader of the united front of Israel’s Arab parties in the Knesset, accused the government of trying to silence criticism. “The government led by Benjamin Netanyahu is chipping away at what is left of the democratic space in Israel,” he said. “Human rights organizations fill an essential role in any society which aspires to be democratic, which is why they are constantly targeted as enemies of Israeli sovereignty.”

Zehava Galon, head of Meretz opposition party, described the bill as incredibly dangerous. “Beyond the fact that this is a bill that ostensibly seeks to increase transparency, it seeks to label human beings,” she said.

The organization Breaking the Silence, comprised of former soldiers who oppose Israel’s actions in the occupied territories, said the timing of the bill was intended to distract attention from the charging of suspects arrested in connection with the arson attack on a Palestinian family in the West Bank village of Douma.

“The reason the bill has come to discussion today is simple: it’s a smokescreen to keep the silence going,” said former soldier Yehuda Shaul. “Last week we saw images from the wedding [in which settlers stabbed a picture of a Palestinian baby killed in the attack]. We know that this week will be surrounded with talk about Douma and the lack of law enforcement in the occupied territories.
Breaking the Silence already reports on its funding every quarter – it receives 55% of its funding from European governments with a budget of 4.5m shekels this year. Shaul said: “Transparency laws are already advanced here: we need to report in our annual report every single donor over 20,000 shekels, including all private donors.”

In comparison, the pro-settlement group El Ad receives estimated funding of 60m shekels a year. Many right-wing non-profit groups received exemptions from the Israeli NGO authority, meaning they did not have to reveal who their private donors were. “This law is another attempt to politically persecute the left,” Shaul said.