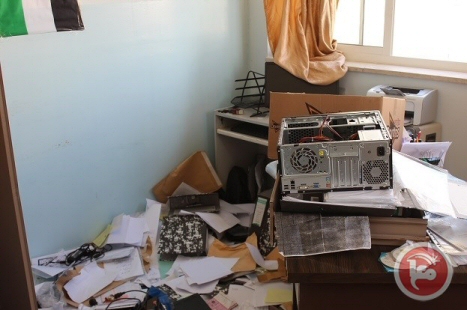 Israeli forces, on Tuesday, ransacked the Bethlehem headquarters of the district’s Palestinian Authority-run committee for charitable work as well as a prisoners’ rights group office in Nablus, destroying and confiscating property.The treasurer of the Bethlehem charity, Mahmoud Khalifa, told Ma’an News Agency that ‘occupation forces broke into the headquarters at 2:40 a.m. and ravaged the place, breaking down the doors of administrative and accounting offices.’

Soldiers cut open two safes in the headquarters and confiscated all materials, as well as a number of files and hard discs from office shelves, according to Khalifa.

Khalifa said that the headquarters sponsors around 1200 orphans from Bethlehem-area villages, cities, and refugee camps.

“The committee does social duties only and we have nothing to do with political issues,” Khalifa said, adding that their activities are authorized by the Palestinian Ministry of Endowment.

Palestinian Minister of Endowment Yousif Ideis denounced the raid on Bethlehem’s charity headquarters. Ideis said in a statement that confiscation of files will “affect the process of distribution of charity” to orphans and needy families rely on assistance.

Fuad al-Khuffash said that Israeli soldiers broke into the fifth-floor office and confiscated computers, fax machines, and all files and documents related to Palestinian prisoners in Israeli custody.

The forces left a letter ordering the office to remain closed until further notice, al-Khuffash told Ma’an, referring to the move as “an attempt to silence the voice which exposes all Israeli violations of human rights and prisoners rights.”

An Israeli army spokesperson did not have immediate information on either incident.
Charitable organizations in the occupied Palestinian territory have been raided or shut down in the past by Israeli forces who say the groups’ activities are a “security threat.”

A number of Palestinian radio stations have been shut down in recent months by Israeli authorities on the grounds that the media outlets were encouraging “incitement” against Israel.

Secretary-General of the Palestinian cabinet, Ali Abu Diak, said last month that the move was part of Israel’s policy to ‘oppress the voice of Palestinian rights’ and to prevent publication of the truth about ‘the ongoing ugly crimes Israel is committing against the Palestinian people.’

According to WAFA correspondence, Israeli forces detained three Palestinians from the northern West Bank district of Nablus. The detainees were identified as Anas Odeh, 25, ‘Abdul-Rahman Qaddumi and Amir Ishtayyeh.

Forces also abducted three other Palestinians during predawn raids into the northern West Bank district of Qalqilia. They were identified as Huyay Hussein, 19, Murad Salim, 29, and Baha’ Shubaita, 23.

Three other Palestinians were taken from the Qalandia refugee camp and Kufr ‘Aqab, in the Jerusalem district. They were identified as Osama Hammad, 17, Hani al-Tmimi and Mou’min al-Qaz‘a.

Troops also detained two other Palestinians as they raided the northern West Bank city of Jenin. They were identified as Asil Zughaibi, 21, and Rami Abu Farha, 20.

Two more Palestinians were kidnapped from the Hebron district. They were identified as Inas Murar, 30, a girl, and Mulsim ‘Ashur, 47.

Forces detained another two from Ramallah and Tubas districts. They were identified as Mu’min Makhluf, 27, and Hamid Maslamani, 32.