24 Shot and Injured by Israeli Forces in Abu Dis 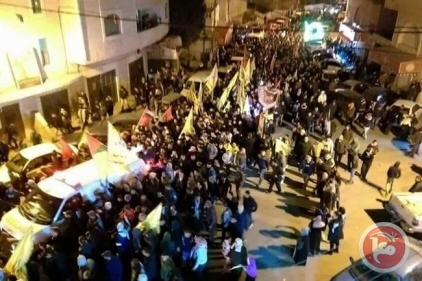 Clashes broke out in Abu Dis, late Tuesday, following a funeral held for a Palestinian killed earlier this month, whose body was held by Israeli authorities for 26 days.Locals said that 24 Palestinians were shot and injured by rubber-coated steel bullets, while 19 others suffered from severe tear gas inhalation, when clashes erupted between residents and Israeli military forces.

Hani Halbiya, a spokesperson of a local popular resistance committee, told Ma’an News Agency that Israeli authorities handed over the body of Mazin Hasan, 37, near the town of al-Eizariya.

Palestinian Red Crescent medics transferred the body to the Abu Dis medical center, where the funeral procession set off to Ureiba’s family home before mourners carried his body to the local cemetery for burial.
An Israeli army spokesperson did not have immediate information on Tuesday’s clashes.

Ureiba’s body was one of three to be returned by Israeli authorities Tuesday evening. The bodies of Palestinians killed while carrying out attacks on Israelis have been withheld in line with a decision made in October by Israel’s security cabinet to return the bodies on a case-by-case basis.

The practice has not been used in such frequency since the Second Intifada, according to Israeli rights group Hamoked.

Ureiba, 37, was shot and killed on Dec. 3 after opening fire on Israeli soldiers stationed near the Hizma military checkpoint north of Jerusalem.

According to reports from the Israeli army following the attack, an Israeli soldier was shot in the hand during the attack.

A 47-year-old Palestinian bystander was shot and critically injured when Israeli forces opened fire on Ureiba.