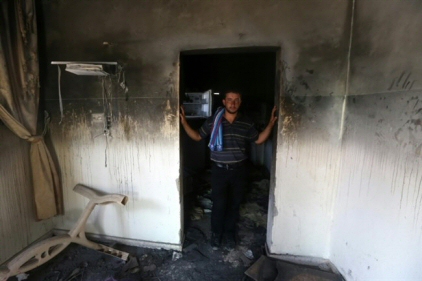 Israeli police have arrested five Israelis involved in a Jerusalem wedding ceremony that incited violence towards Palestinians, Israeli media reported Tuesday.The groom of the wedding — reportedly a well-known member of the radical right — was arrested in addition to an Israeli soldier and two minors, Israeli daily Haaretz said, according to Ma’an.

Israeli police also arrested renowned extremist settler Daniel Pinner from the illegal settlement of Tapuah, who was among a number of others seen dancing with a gun in video footage of the wedding ceremony, Haaretz reported, adding that Pinner’s attorney claimed the gun was a toy.

Israeli police spokesperson Luba al-Samri said in a statement at the time that the investigation was opened due to ‘numerous and serious offenses seen in the video.”

The video shows Israelis present at the wedding dancing and singing songs of revenge while waving knives and guns in the air.

At one point during the ceremony, a masked Israeli youth waves a firebomb while another stabs a photo of Ali Dawabsha, an 18-month-old Palestinian burned alive in an arson attack carried out by Jewish extremists over the summer.

The infant’s parents later died from severe burns, leaving their four-year-old child Ahmad as the sole survivor of the attack.

Controversy over the video erupted as Israel’s right slammed Israel’s internal security agency Shin Bet for its investigation into the Dawabsha murders, which has increased internal tensions within the national religious right.
Israeli Prime Minister Benjamin Netanyahu said that the wedding video showed ‘the real face of a group that poses danger to Israeli society and security,” days after the Shin Bet warned that Jewish terror organizations were aiming to “violently overthrow” the Israeli government.