Gopstein: Christians Not Welcome in Jerusalem 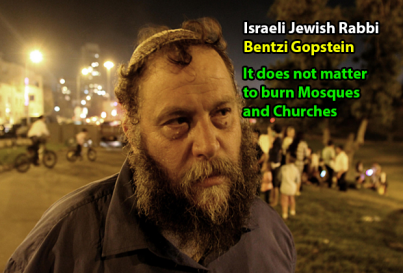 An Israeli Rabbi said, Wednesday, that Christians are not welcome in Jerusalem, and that he does not mind burning mosques and churches.Bentzi Gopstein told Israeli TV Channel 2 that Israeli Jews practically prevent Christians from entering Jerusalem.

He also called for making obstacles towards the expansion of Christianity and Islam in annexed Jerusalem.

According to Days of Palestine, the extremist rabbi also said that he does not mind burning mosques and churches in Jerusalem, stating that Israeli authorities must arrest Christian monks and nuns.

Gopstein is the head of an notorious extremist Israeli Jewish group called Lehava, which is responsible for insulting and harassing monks and nuns in Jerusalem.

Several Israeli groups are active in the occupied holy city, with regard to extreme Judaisation activities, including the seizing of Islamic and Christian properties.

Israeli TV has previously proved that the Israeli government stands behind these groups, although it sometimes condemns their acts in token concern.