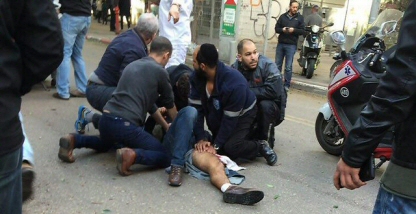 A shooting was carried out Friday, near a Tel Aviv pub, killing two Israelis and injuring seven, Israeli police and medics said.An Israeli police spokesperson said that the shooter opened fire on Dizengoff street before fleeing the scene.

Israeli media reported, according to Ma’an, that some of those injured were hit by broken glass that shattered when the attacker opened fire.

Police were combing the area for the suspect, following the attack, and investigations are ongoing, although it is not yet clear if the incident was a suspected ‘terror attack’ or criminally motivated.

Video footage from a surveillance camera shows a man shopping in a grocery on the street of the attack before grabbing a gun out of his backpack and opening fire outside the store.

The attack marks the first in the coastal city since November 19, when two Israelis were stabbed and killed near Tel Aviv’s Panorama building by a Palestinian from the Hebron-area village of Doura, in the occupied West Bank.

A wave of unrest that erupted in October across the occupied Palestinian territory and Israel has left over 140 Palestinians killed by Israeli forces and settlers, and 21 Israelis killed in attacks carried out by Palestinians.