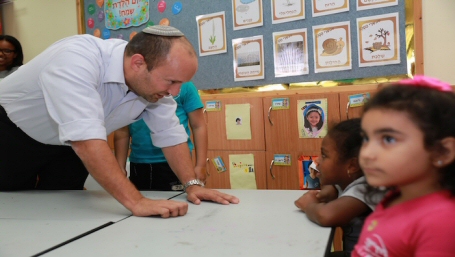 The Israeli Ministry of Education has banned “Borderline” from use in high schools.The Ministry explained its decision to ban Dorit Rabinya’s “Borderline” from high schools as to maintain “the identity and heritage of students in every sector” and out of concern that “intimate relations between Jews and non-Jews threatens the separate identity.”

“Borderline” tells the story of a Jewish Israeli translator and a Palestinian artist falling in love in New York before eventually returning to Tel Aviv and Ramallah, respectively.

The Ministry also asserted that “young people of adolescent age don’t have the systemic view that includes considerations involving maintaining the national-ethnic identity of the people and the significance of miscegenation.”

Education Minister and member of the right-wing Jewish Home party, Naftali Bennett, approved of the decision.

Rabinya’s “Borderlife” has enjoyed critical acclaim. The book won this year’s Bernstein Prize for young writers – an annual Israeli literary prize. Furthermore, according to Haaretz, a large number of literature teachers requested that “Borderlife” be approved for use in advanced literature classes.

Middle East Eye reported that Shlomo Herzig, the head of literary studies at the ministry, appealed the decision. Herzig commented: “the acute problem of Israeli society today is the terrible ignorance and racism that is spreading in it, and not concern over intermarriage.’

The ministry’s decision to ban Borderline from high schools is reflective of the Israeli government’s methodical efforts to not only entrench the occupation, but also to restrict public discourse so that the next generation of Israelis approves of it.