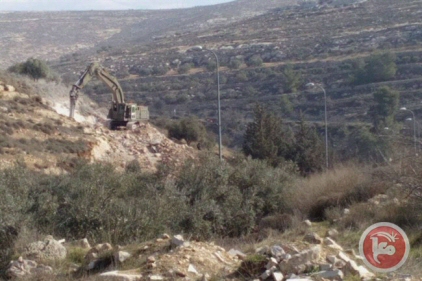 Israeli forces razed Palestinian lands in the Wadi Sair area of eastern Hebron, Thursday, with the intention of building a military watchtower, the mayor of the village said.Kayid Jaradat said, according to Ma’an News Agency, that Israeli forces had started razing lands early Thursday without notifying the Palestinian municipality or the owner of the land, Ismail Abed Rabbu al-Shalaldeh, prior to the land confiscation.

Jaradat added that the military tower is expected to be a precursor to a permanent military checkpoint in the area, which would restrict Palestinians’ movement, particularly on the main northern route out of Hebron toward the rest of the occupied West Bank.

Activist Ahmad Halayqa said that the tower would inhibit movement in the area and would be located near the Asfar Israeli settlement, which was also built on Sair village land.

Meanwhile, the Hebron municipality constructed a fence in Hebron City’s Wadi al-Nasara neighborhood in order to provide protection to residents against Israeli settlers from the nearby illegal Israeli settlement of Kiryat Arba, who often assault Palestinians and their homes in area.

An Israeli army spokesperson did not immediately respond for comment regarding Thursday’s developments.

Freedom of movement for residents across the southern occupied West Bank district of Hebron has been severely restricted since mid-October, with the UN Office for the Coordination of Humanitarian Affairs reporting higher restrictions than any other area across the occupied Palestinian territory.

Israeli military checkpoints have been set up at the entrances to most Hebron-area villages, and residents have reported harassment, arbitrary detentions, an increase in traffic, and curfews.