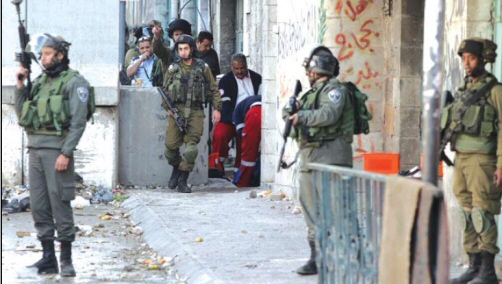 Israeli violations of international law and international humanitarian law in the oPt continued during the reporting period (17 – 30 December 2015).Israeli attacks in the West Bank & Gaza:

Israeli forces have continued to commit crimes, inflicting civilian casualties. They have also continued to use excessive force against Palestinian civilians participating in peaceful protests in the West Bank and Gaza Strip, the majority of whom were youngsters. Occupied East Jerusalem witnessed similar attacks. During the reporting period, Israeli forces and police killed 17 Palestinian civilians, including 2 children and a woman. 14 of them were killed in the West Bank and the 3 others were killed in the Gaza Strip. Moreover, 106 civilians, including 34 children, were wounded. 59 of them, including 10 children, were wounded in the Gaza Strip while the remaining others were wounded in the West Bank. Concerning the nature of injuries, 85 civilians were hit with live bullets and 21 were hit with rubber-coated metal bullets.

During the reporting period, Israeli forces conducted at least 185 military incursions into Palestinian communities in the West Bank and 8 ones in occupied East Jerusalem. During these incursions, Israeli forces arrested at least 130 Palestinian civilians, including 28 children and 4 women. Twenty-six of these civilians, including 13 children and a woman, were arrested in East Jerusalem.

On 29 December 2015, Israeli forces raided al-Ahrar Centre for Prisoner Studies and Human Rights in Nablus. They confiscated the archive, three laptops, a PC, a TV, fax, telephone, a satellite dish and a router. After that, they fixed an order closing the centre. On the same day, Israeli forces raided a Zakat Committee office in Bethlehem after they damaged the doors. They sawed two safes and took all documents in there. It should be noted that the aforementioned committee offers services to 1,200 orphans and hundreds of families.

In the context of seizing Palestinian houses in favor of settlement organizations, on 17 December 2015, the Israeli Magistrates Court in occupied Jerusalem handed lawsuit notices over to four families living in area (32) in Aqabet al-Khalidiyah that an Israeli settlement organization had filed lawsuits before the aforementioned court claiming that the houses in that area belong to a Jewish person.

On 22 December 2015, Israeli forces vacated a premises belonging to Hussein al-Qaisi in Aqabet al-Saraya neighbourhood in East Jerusalem’s Old City, claiming that it belongs to settlers. An eyewitness said to PCHR’s fieldworker that Israeli forces raided the premises and took some of its contents outdoors. They then changed the locks and arrested the premises owner. He added that the settlers claimed that it belongs to them since before 1948.

In the context of house demolitions, on Tuesday, 29 December 2015, the Israeli municipality bulldozers demolished an under- construction building in Sour Baher village, southeast of occupied Jerusalem, under the pretext of non-licensing. This building belongs to Ra’ed Raja Rabay’ah. Rabay’ah said to PCHR’s fieldworker that Israeli forces demolished the under-construction building without notice. He added that he started building it two months ago. The 2-storey building has cost him NIS 170,000 so far.

As part of house demolitions on grounds of collective punishment, on Tuesday, 29 December 2015, Israeli forces raided a house belonging to the family of Alaa Abu Jamal in al-Mukaber Mountain village, southeast of occupied Jerusalem. They handed an order over to his family to vacate the house in 48 hours to be demolished. It should be noted that Alaa Abu Jamal was killed by Israeli forces after he carried out a run-over and stabbing attack that resulted in the killing of an Israeli Rabbi on 13 October 2015.

As part of settler attacks, on Saturday evening, 26 December 2015, a group of settlers attempted to kidnap and kill Enas Syori (23) while she was going back home in occupied Jerusalem. She was coming from Beit Hanina village and going home before she got lost around “Ramot” Street, near Shu’fat village. The aforementioned woman was surprised to see a number of masked settlers attacking her. They smashed her car windows and attempted to strangulate her. They then obliged her to step out of her car. Her husband Samer Syori said that one of the attackers attempted to strangulate Enas, but she could run away after she took off her coat that was held by one of the settlers. In the meantime, the settlers fired a number of bullets at her, but she was not hurt.

On 17 December 2015, Israeli forces accompanied by an Israeli Civil Administration vehicle moved into Khellet Ibrahim and Kherbet al-Ras areas, west of Ethna, west of Hebron. The Civil Administration officer distributed notices to halt construction works under the pretext of building without construction license in area (C) according to Oslo Accords.

On 22 December 2015, a group of settlers moved into al-Dhhour area, east of Beitlellow village, northwest of Ramallah, which is close to “Nahal’eil” settlement. They fired two gas canisters into a house belonging to Hussein Abed Hussein al-Najjar (32). The two canisters penetrated the kitchen window. As a result, Hussein’s wife and toddler suffered tear gas inhalation. Before withdrawing, the settler wrote in Hebrew a slogan on the walls of Hussein’s brother house nearby.