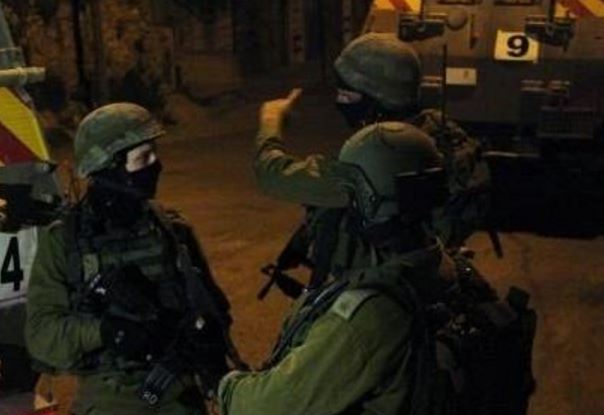 Israeli soldiers kidnapped, on Monday at dawn, three young Palestinian men from occupied East Jerusalem, one in Jenin, and two others in Ramallah and Bethlehem, in addition to one Palestinian on the Huwwara roadblock, near Nablus. At least twenty-one Palestinians have been kidnapped in the West Bank.Palestinian media sources in Jerusalem said the soldiers surrounded and invaded many homes in the occupied city, before interrogating many families, and kidnapped two young men.

The kidnapped have been identified as Ghassan ‘Aasi and Nour Shalabi; there were moved to interrogation centers in the occupied city.

Another Palestinian, identified as Mohammad Talhami, from Jerusalem, was kidnapped near the Jaba’ Israeli military roadblock, near the northern West Bank city of Jenin.

The soldiers also invaded Bethlehem, searched several homes, and kidnapped a young man identified as Hamza Osama al-Masri, before taking him to the Etzion military base.

Another Palestinian, identified as Ahmad Hasan Obeid, 24 years of age, was kidnapped in the central West Bank district of Ramallah, after the soldiers stormed and searched many homes.

Qabaha’s wife said the soldiers searched and ransacked the family home, and their toy store, causing excessive damage, and kidnapped her husband.

The soldiers also surrounded the village, and installed several roadblocks isolating it from its neighboring Palestinian communities.

Furthermore, soldiers stationed on the Huwwara roadblock, south of the northern West Bank city of Nablus, kidnapped one Palestinian trying to cross the roadblock, and took him to an unknown destination.

The identity of the Palestinian remained unknown until the time of this report, while the soldiers briefly closed the roadblock to all Palestinian traffic.

In addition, at least eight Palestinians have been kidnapped, on Monday at dawn, after dozens of Israeli soldiers invaded the al-Far’a refugee camp, east Nablus, and Tal village, west of Nablus.

Also on Monday at dawn, dozens of soldiers invaded several Palestinian communities in the southern West Bank district of Hebron, searched many homes and kidnapped six Palestinians, in addition to summoning two Palestinians, including a child, for interrogation.