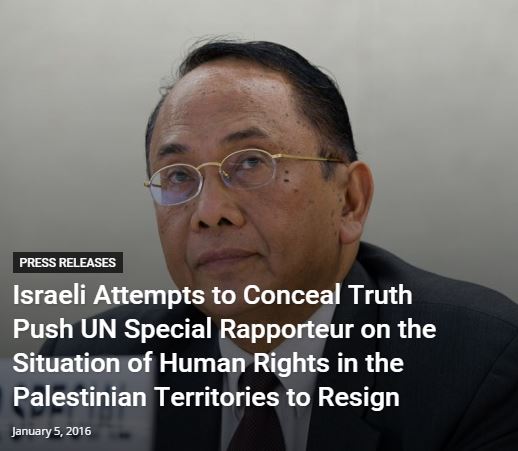 The United Nations Special Rapporteur on the situation of human rights in the Palestinian territories, Makarim Wibisono, yesterday submitted his resignation to the President of the Human Rights Council after Israel had repeatedly denied him access to the occupied Palestinian territory (oPt).The Palestinian Center for Human Rights (PCHR) stresses that Israel’s continuous banning of Special Rapporteurs from entering the oPt is part of the Israeli policy to conceal the truth relevant to the commission of war crimes and grave violations of human rights against the Palestinians, who are the original owners of the land.

Mr. Wibisono mentioned in his resignation that repeated requests for access, both written and oral, had been unsuccessful for over 18 months. He also did not receive any reply from Israel to his latest request in October 2015.

Furthermore, Mr. Wibisono underscored that his mandate would not be fulfilled without having direct access to the Palestinian victims in the West Bank and Gaza Strip.

‘Unfortunately, my efforts to help improve the lives of Palestinian victims of violations under the Israeli occupation have been frustrated every step of the way… It is my sincere hope that whoever succeeds me will manage to resolve the current impasse, and so reassure the Palestinian people that after nearly half a century of occupation the world has not forgotten their plight and that universal human rights are indeed universal,’ said Mr. Wibisono.

The Israeli authorities continued to deny the Special Rapporteurs access to the oPt, as according to the spokesperson of Israel Ministry of Foreign Affairs, the mandate of the Special Rapporteur on the situation of human rights in the oPt that was approved by 47 Member States in the Human Rights Council is ‘biased and distorted’.

This was also agreed on by Israel’s ally the USA. In addition, Israel kept banning Richard Falk, former UN Special Rapporteur, from entering the oPt during his 6-year mandate.

It should be mentioned that the Special Rapporteur’s Mandate is part of the UN Mechanisms to protect human rights pursuant to a Mechanism known as ‘Special Procedures’.

The Special Procedures include independent human rights experts carrying out their duties free of charge with mandates to report human rights violations from a thematic or country-specific perspective.

The Human Rights Council established the position of Special Rapporteur on the situation of human rights in the oPt in 1993 and the mandate has so far been renewed.
PCHR denounces banning the Special Rapporteur from entering the oPt and the international community’s negativity that renders Israel as an outlaw State.

This ban comes as part of a series of obstacles imposed by the Israeli authorities before all UN inquiry missions; the last of which was the United Nations Fact-Finding Mission following the 2014 Israeli offensive on the Gaza Strip.

PCHR warns against the Israeli practices, which reflect the size of Israeli crimes against Palestinians and efforts made to hide those crimes from the world.

1. The International community to pressurize Israel to allow the unconditional entry of all UN missions to the oPt;

2. The Human Rights Council and all international mechanisms to exert extra efforts to convey the reality of Israeli violations against Palestinians to the whole world;

3. The UN to activate its human rights mechanisms to face the blatant Israeli challenge of UN Mechanisms and violation of Palestinian rights in the oPt; and

4. All the competent parties at the international level to put an end to the impunity granted to Israel that led to the increase of violations against Palestinians.