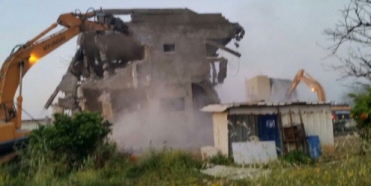 The Israeli army, Tuesday, delivered a notification to demolish two agricultural structures and to stop the construction work on a house in Beit Ummar, a town located to the north of Hebron, according to local sources.Yousef Abu Maria, an anti-settlement activist in the town, told WAFA that an Israeli army force broke into Beit Zana and Feredes areas, just outside the town, and notified local Palestinians about a military order to demolish two private-owned animal barns.

The army also handed Saber Abu Maria, a local Palestinian, a military order to stop the construction work on his house, under the pretext of construction without a permit. The force also seized a tractor in the area, according to WAFA.

Also on Tuesday, Israeli forces confiscated construction materials and equipment belonging to the municipality of Dahiriya, to the southwest of Hebron, according to local sources.

An Israeli army force broke into Wadi al-Khalil neighborhood outside the town, where they obstructed a municipal project to open an agricultural road; run by Dahiriya municipality in cooperation with Action Against Hunger (ACF).

The army seized some of the construction materials and equipment used in the project, as well as handed over a notice to stop the project immediately, under the pretext of lacking an Israeli-issued work permit in the area.

The project area is located in Area C of the West Bank, which is under full Israeli military and civil control.

Israel rarely issues construction permits for Palestinians in Area C and in East Jerusalem, forcing Palestinians to construct without obtaining an Israeli permit.

Issuing permits for Palestinians, unlike for Jewish settlers, requires unreasonable fees that most families cannot afford to pay.

The Israeli Committee against House Demolitions (ICAHD) explains in a special report that “in almost all cases Palestinians have no choice but to build ‘illegally’, as permits are almost impossible to obtain.”

It added, “It deprives them of their home and land – often their main asset – and frequently results in disruption to livelihoods, a reduced standard of living and limited access to basic services. The impact on children can be particularly devastating,” said the United Nations Office for the Coordination of Humanitarian Affairs (OCHA).