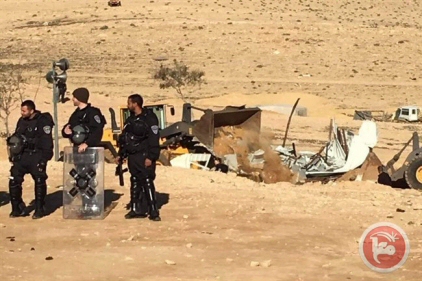 The Israeli military, on Wednesday, demolished a mosque in the unrecognized Palestinian Bedouin village of Rakhama in the Negev in southern Israel, Talal Abu Arar, a Palestinian member of the Israeli Knesset, or parliament, stated.Abu Arar said he attempted to prevent the demolition, but had been unable to convince the Israeli authorities. ‘(They) do not spare any effort in exerting pressure on the Arab population of the Negev in their attempt to empty the land of Arabs and to displace them,’ he said.

‘The demolition of the mosque today, and mosque demolitions in the Negev in general, is a declaration of war on Islam, in line with the religious war Israel has been igniting in the region,’ Abu Arar said.

The Palestinian MK slammed Israel for not providing ‘any services to Palestinians in unrecognized villages.’ Despite collecting taxes from Palestinians, he said that ‘Israeli authorities demolish their homes and close the doors of livelihoods in their faces.’

Rakhama is one of around 40 Bedouin villages in the Negev that Israel refuses to recognize — together holding nearly 90,000 people.

Israeli authorities last month demolished structures in the Bedouin village of al-Araqib, also in the Negev, for the 92nd time.

Israeli policy regarding Palestinian Bedouins — who live under the constant threat of displacement — has been slammed by Human Rights Watch in the past as completely disregarding international law, which forbids discriminatory evictions.