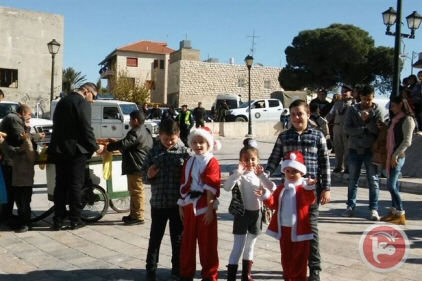 Eastern Christian denominations following the Orthodox calendar, on Wednesday, welcomed archbishops and patriarchs to celebrate Christmas Eve outside the traditional birthplace of Jesus Christ, at the Nativity Church, in Bethlehem.Hundreds of Palestinians affiliated to the Orthodox, Assyrian, Coptic and Ethiopian churches arrived on Manger Square to mark the occasion.

Jiries Qumsiyeh, a spokesperson for the Palestinian Ministry of Antiquities and Tourism, told Ma’an News Agency that the Assyrian patriarch was the first to arrive, followed by the Coptic patriarch, and the Orthodox Patriarch Theophilos III.

A number of Palestinians chose to boycott the parade due to allegations that Theophilos III has been illegally selling off land belonging to the Orthodox patriarchate.

Qumsiyeh said that Palestinian president Mahmoud Abbas might attend the midnight mass, after meeting with representatives of the Orthodox denomination and other community leaders earlier on Wednesday.

Jordanian Minister of Tourism Nayif al-Fayiz and Minister of Public Works Sami Halasah were also expected to attend the celebrations, he said.

Qumsiyeh said that a number of tourists — mostly from Russia, the US, and Eastern Europe — had arrived in Bethlehem to take part in the celebrations.

Palestinian police spokesperson Luay Irzeikat said that more than 500 security officers had been deployed in Bethlehem both in uniform and in plain clothes.

Unrest across the occupied Palestinian territory has served to overshadow this year’s Christmas celebrations, including those led by the Latin Patriarchate in December.

A subdued Christmas has compounded an already difficult year for Palestinian Christians, who have suffered the full brunt of Israel’s policies, most notably land seizures and, for those in Jerusalem, the revocation of residency rights.

There have been several attacks on Christians holy sites this year, and many Palestinian Christians have chosen to emigrate abroad following nearly 50 years of Israel’s military occupation.