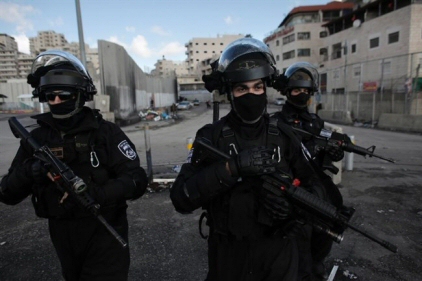 Israeli forces demolished the home of a Palestinian suspected of having killed two Israelis in October, after large numbers of Israeli military vehicles stormed the village of Surda, north of Ramallah, central West Bank, at dawn on Saturday.Muhannad al-Halabi, aged 19, was shot dead by Israeli forces on Oct. 3, 2015 after he killed two Israelis and injured two more in Jerusalem’s Old City, in the first stab attack to take place in the wave of unrest that has continued in the West Bank and East Jerusalem.

“Overnight, according to government directives, security demolished the home of Muhannad al-Halabi, who murdered Rabbi Nehemia Lavi and IDF soldier Aharon Banita on Oct. 3,” she said.

Locals said that clashes broke out in Surda between young Palestinian men and Israeli troops who were in the village for the demolition. Witnesses and medical sources said three young men were hit with rubber-coated steel bullets — one in the back, another in the leg and a third in the hand.

Before the demolition, Israeli forces closed traffic on the road between Ramallah and Surda. The road is a main route to several villages and towns in the northern outskirts of the Ramallah district. Ambulances and reporters were denied access to the area.

Israeli troops also deployed in the outskirts of Ramallah and the village of Abu Qash, locals said.

Al-Halabi’s family had evacuated the house four days after the attack and moved to live in the city of Ramallah in anticipation of their house being destroyed.

An initial objection to the demolition was filed by the HaMoked Center for the Defense of the Individual, an Israeli human rights organization, on Oct. 17, 2015.

According to Israeli newspaper Haaretz, the Israeli High Court of Justice froze the demolition order for al-Halabi’s home along with several others on Oct. 22, but the court later rejected an appeal against the demolition.

Israeli forces have long used house demolition as a punishment for Palestinian attacks or attempted attacks against Israelis, even if the alleged perpetrator had already been killed or detained. The practice had been decried by numerous rights groups as collective punishment mainly targeting the accused’s relatives.

Israeli rights organization B’Tselem has slammed the house demolitions as a “punitive measure against the Palestinian population,” and argued that “the deterrent effect of house demolitions has never been proven.”