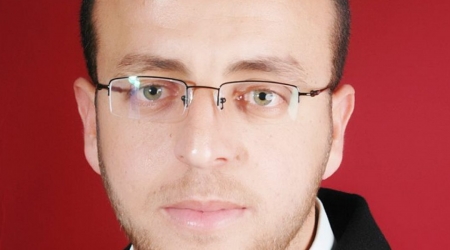 The Commission of Detainees’ Affairs warned, on Monday, of the Israeli Medical Committee’s decision to force-feed Palestinian journalist Muhammad Al-Qeeq, who is currently on hunger strike.Al-Qeeq has waged a hunger strike since November 24th, in protest of his administrative detention.

Lawyer Heba Masalha said that Al-Qeeq’s health condition is quite critical and has deteriorated severely, adding that the Israeli Medical Committee gave him minerals forcibly.

Masalha visited Al-Qeeq in Afula Hospital, explaining that he was now dependent on medical devices, and could not speak. She added that he had lost consciousness and suffered from muscle stiffness.

She called for saving the life of Al-Qeeq, who refused to take supplements or undergo medical examination.

Physicians in Afula hospital explained that Al-Qeeq is in very critical condition and that his kidneys and liver may be affected, and he may suffer from brain hemorrhage.

The Commission holds Israeli occupation authorities responsibile for al-Qeeq life, and have called for ending his illegal administrative detention without trial or charge.

According to the World Medical Association, the Red Cross, and the United Nations, force-feeding is a cruel, inhumane and degrading punishment, and a flagrant violation of international law.