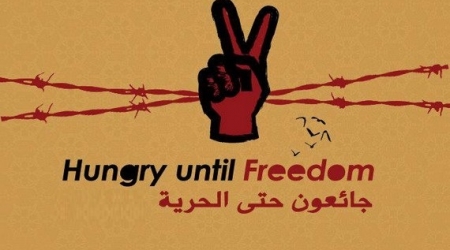 Three Palestinian detainees continue their open-ended hunger strikes, staged in differing duration, according to a report released by the PLO’s Committee of Detainees and Ex-Detainees, on Sunday.The prisoner, Kifah Hattab, from Tulkarem, sentenced twice to life imprisonment since 2003, continued his open-ended hunger strike since the 25th of last November, demanding Israeli authorities to deal with him as a prisoner of war.

Additionally, Hattab has also refused to wear the prison’s uniform, and to stand for the daily counting.

Hattab, who currently languishes at Al-Afoula prison clinic for his deteriorated health condition, called Israel to recognize him as a war prisoner according to the Geneva Conventions.

The two other prisoners who continue striking are Muhammad Al-Qeeq, since November 24th, and Abdallah Abu Jaber, since Novemeber 8th.