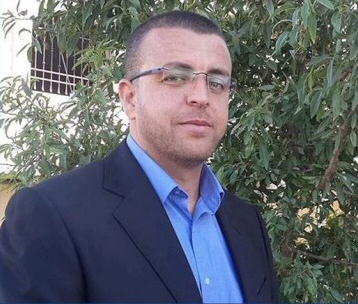 The Palestinian journalist Muhammad Al-Qeeq has fallen into a coma, after entering his 48th day of hunger strike, family sources revealed.According to the Palestinian News Center (PIC), Al-Qeeq’s wife said that her husband had entered a very critical stage of his hunger strike that was started on Nov. 24, 2015.

Emek Medical Center, the hospital in Afula where he is hospitalized, has begun taking forced blood samples from his body as a prelude to force feed him, the wife quoted his lawyer as saying.

On the forty-sixth day after he began his hunger strike, Al-Qeeq lost the ability to speak or walk, and began to vomit and urinate blood.

According to his lawyer, Ashraf Abu Snena, Al-Qeeq can barely communicate using signals.

Both his legs and one of his arms are handcuffed to his bed at all times, and he already lost 22 kilos, according to the PNN.

He is from the village of Dura, near Hebron, and used to work as a reporter for the Saudi news channel “Almajd.”

Al-Qeeq was arrested on November 21, 2015 when Israeli soldiers blew up the front door of his house and took him in for interrogation at Israel’s Kishon (Jalame) detention center.

He went on hunger strike in protest against being held under administrative detention without charge or trial.

According to PIC, over the past week, Al-Qeeq has refused an Israeli offer for his release after extending his administrative detention for one last time. He declared his insistence on maintaining his hunger strike until his unconditional release.