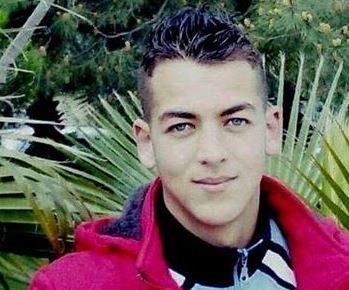 Israeli soldiers shot and killed, Tuesday, two Palestinians, including one teen, near Beit ‘Anoun village junction, east of the southern West Bank city of Hebron, while a third Palestinian was shot and injured, and many others suffered the effects of tear gas inhalation. Dr. Sharif at-Tarda, head of the Emergency Unit in the Al-Mezan Hospital in Hebron, said the soldiers shot Adnan Ayed Hamed al-Halayqa, 17, with a live round in the right side of his chest, and another Palestinian teen, who initially remained unidentified, as the soldiers held his body.

Al-Halayqa, from Shiokh town near Hebron, died of his serious injury in the al-Mezan Medical Center in Hebron city, Palestinian medical sources said.

The second slain Palestinian was later identified as Mohammad Ahmad Kawazba, 23, from Sa’ir town, near Hebron. He is the eleventh Palestinian from Sa’ir, to be killed by the army since October, 2015.

The soldiers prevented locals, and even medics, from reaching Kawazba, and left him to bleed to death.

The Israeli army claimed the Palestinians ‘attempted to stab soldiers;’ no injuries were reported.

Palestinian medics managed to move a third Palestinian, who was also shot and injured by army fire, to a local hospital in Hebron.

The army also fired several gas bombs and rubber-coated steel bullets at many residents who gathered in the area, causing many to suffer the effects of tear gas inhalation.

In addition, the soldiers kidnapped a young Palestinian woman, while walking near the Ibrahimi mosque in the Hebron city.

Also on Tuesday, the soldiers invaded Beit Jala city, in the West Bank district of Bethlehem, and clashed with local youths, before shooting to death a young man, identified as Ahmad Ibrahim Abu Srour, 21.

In Hebron, the soldiers kidnapped Jibreel Khaled Kawazba, 19, Jibreel Salam Sweiti, 29, from Beit Awwa near town, while another Palestinian, identified as Ayyoub ‘Aassi Damra, was kidnapped in Aqbat Bani Jabr in Jericho.