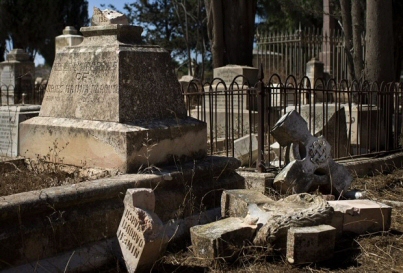 The Latin Patriarchate of Jerusalem said that extremist Israeli Jews have desecrated a Christian cemetery near the occupied city of Jerusalem.“People attacked and desecrated the cemetery in Beit Jamal, west of Jerusalem, and destroyed crosses,” Latin Bishop of Jerusalem William Shomali told Vatican Radio.

He noted that Israeli police are still investigating the incident.

“All we know is that the attackers are extremist Jews living in the same area,” he said, noting that “this has happened several times in the past and the attackers were from amongst the Jews in the area.”

Shomali pointed out, according to Days of Palestine, that such attacks have been increasing, and stressed the “urgent” need for the police to search and find the perpetrators, “who continue attacking churches, cemeteries, monasteries and other Christian symbols.”

The bishop insisted that the extremists are known to Israeli security services. “As such, we call on the police to be more serious in bringing them to justice.”