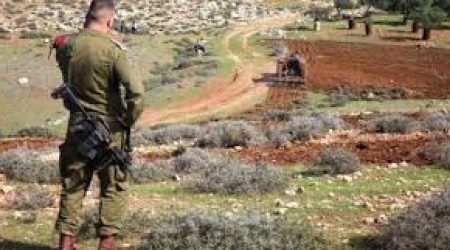 Israeli forces have confiscated 300 dunams of Palestinian farmlands in Ya’bad town, and declared it a closed military zone.The director of Ya’bad municipality, Yosef Atatrah, said that soldiers erected a barbed wire around the lands, adding that the farmers found military orders hanging on the trees, dating January 7, which noted that the area is a closed military zone.

Atatrah explained, according to Al Ray, that these orders have grave impacts on the Palestinian economic and agriculture life, since the owners of the lands will not be able to reach them.

Ya’bad lands have witnessed active military activities, which require a strong stand by the relevant rights groups in order to stop Israeli aggravations.

An Israeli report revealed, recently, that 78%percent of the confiscated lands are not used for military purposes; instead, they are used to expand the area of conjunction settlements.

The report estimated that the size of the area (which Palestinians could not reach) totals some 1,765,000 dunams. In other words, one third of the West Bank area and more than half of C area, which is subject to Israeli authorization.

The report also noted that the lands on which settlement are constructed constitute more than half a million dunams, which are also a closed military zone.