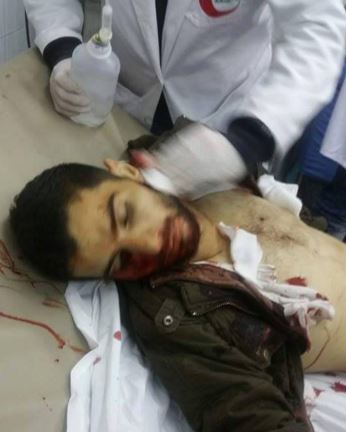 Israeli soldiers invaded, Tuesday, Beit Jala city, in the West Bank district of Bethlehem, and clashed with local youths, in the Sahl area, before shooting to death a young man, and wounding several others, one seriously. Medical sources said the soldiers shot Srour Ahmad Ibrahim Abu Srour, 21, with a live round in his chest, inflicting a serious injury.

The young man was moved to Beit Jala governmental hospital, where he died of his wounds despite all efforts to save his life.

Also, one Palestinian, identified as Tareq Ziad Obeid, 20, was also shot with a live round in the chest, and is currently in a critical condition in Beit Jala hospital.

Head of the Emergency Unit of the Red Crescent in Bethlehem Mohammad Awad said the soldiers also shot and injured another Palestinian with a live round in his leg, while scores of residents suffered severe effects of tear gas inhalation.