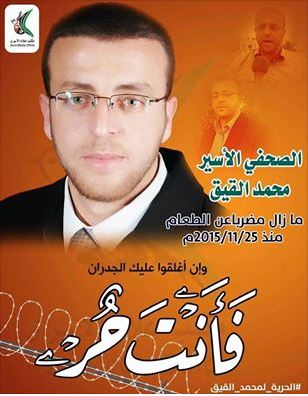 The Head of the Detainees and Ex-Detainees Committee Issa Qaraqe’ said that the Israeli Authorities have force-fed hunger striking detainee, journalist Mohammad al-Qeeq, via intravenous infusion.Qaraqe stated al-Qeeq is the first detainee to be force-fed since the Israeli government passed the force-feeding law in July of 2015, in an attempt to crush the legitimate demands of the detainees, including those held under arbitrary Administrative Detention orders, without charges or trial.

The official also said that the ‘Ethics Committee’ in the al-‘Affoula Israeli Hospital, composed of three doctors, a psychologist and a social worker, have approved the force-feeding of al-Qeeq.

Al-Qeeq has waged a hunger strike since November 24th, in protest of his arbitrary administrative detention, without charges or trial.

The detainee was strapped, hooked to two machines, and was force-fed through an intravenous infusion, allegedly because his strike is endangering his life.

Al-Qeeq is a Palestinian journalist working for the al-Majd TV; he is from Ramallah, and started his strike on November 25, 2015.

Qaraqe’ also said that, despite the illegality of force-feeding hunger striking detainees, and despite the objections of Israel’s Physicians’ Union and unions around the world, Israel continues to act with impunity, and continues to act as if it is above international law.

The Palestinian official also said that detainees Abdullah Abu Jaber and Kifah Hattab are ongoing with their strike, adding that their health conditions are now life-threatening, while Israel continues to ignore their demands.