4 Palestinians, Including a Journalist, Kidnapped from West Bank 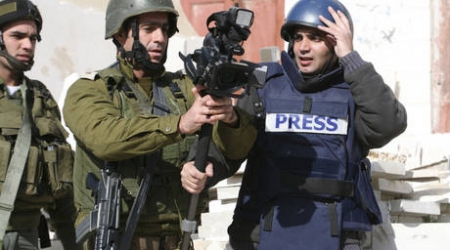 Israeli forces, early Tuesday, abducted four young men, including a journalist, from Nablus and Jenin, in the north of the occupied West Bank.Local sources reported that an Israeli special force took, late at night, Tamer Al-Bastami from Nablus, while he was on Rojjeeb Street, and seized his car.

Several Israeli troops stormed the city at dawn,carrying out raids and ransacking the premises for a number of homes in Ras Al-Ain, Khla Al-Amood, Al-Qisaria neighborhoods. The troops also took Suhaib Al-Kharaz, 25, and Ahmad Qandil, according to Al Ray.

Violent clashes erupted between Israeli forces and Palestinian young men in the Khla Al-Amood neighborhood, where soldiers both fired rubber-coated and live bullets, in addition to tear gas bombs. A young Palestinian man was reported to have benn injured.

Forces also abducted a correspondent for Palestine Today TV, Mujahed AL-Saady, from Jenin, in the north of the West Bank, after ransacking his home early this morning.

Locals reported that soldiers wreaked havoc in the home, and deployed its forces in the neighborhood for hours.