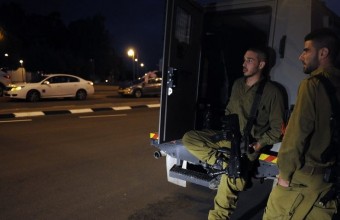 Abu al-Hummus alleged, according to Ma’an, that Israeli forces began firing the rubber bullets and tear gas ‘randomly,’ and for no apparent reason.

During the clashes, Israeli police reportedly raided homes of Palestinians in the village, and detained two people identified as Muhammad and Alaa Halasah.

Last week, a handmade explosive device was found and dismantled by Israeli security forces at the top of the main entrance to ‘Isawiyya, near a flying Israeli checkpoint.

‘Isawiyya is a contentious Palestinian neighborhood in occupied East Jerusalem that sees frequent raids from Israeli forces, which usually turn into clashes. Since the start of October, Israeli forces have regularly closed off routes into and out of the neighborhood.