Army Kills A Palestinian Near Hebron 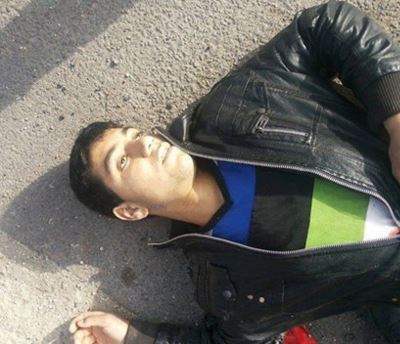 The Israeli army claimed the soldiers ‘thwarted an attack when the young man attempted to stab them, causing no injuries among soldiers.’

Palestinian eyewitnesses said Jabarin was executed by the soldiers, who fired more than several live round at him.

After shooting Jabarin, the soldiers kept him bleeding on the ground, and prevented Palestinian medics from approaching him.

Jabarin is the twelfth Palestinian, from Sa’ir town alone, to be killed by the Israeli army since October 1, 2016.

Following the fatal shooting, clashes also took place between the soldiers and dozens of local youths, who hurled stones and empty bottles on them; the soldiers fired gas bombs, live rounds and rubber-coated steel bullets.

The home belongs to resident Yousef Abu Mariya; the army claims it was built ‘without a construction permit.’

In addition, the soldiers demolished sheds, hothouses and an agricultural pool, in Einoun area, east of the central West Bank city of Tubas.