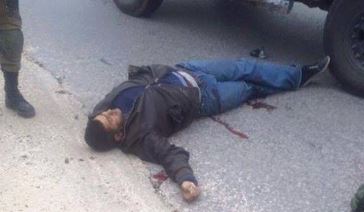 Israeli soldiers killed, on Thursday afternoon, a young Palestinian man, at a military roadblock, north of the northern West Bank city of Nablus.The slain Palestinian has been identified as Haitham Mahmoud Abdul-Jaleel Yassin, 36, from Aseera ash-Shemaliyya town, north of Nablus.

The Israeli army claimed that the Palestinian ‘stabbed a soldier,’ and described the injuries of the soldier as ‘very light.’

In related news, the soldiers transferred the body of Moayyad Awni Jabarin, 20, from Sa’ir town, east of Hebron, to the Palestinian side, before an ambulance moved him to the al-Ahli hospital in Hebron.

Jabarin was killed, on Thursday morning, after Israeli soldiers shot him near the Beit ‘Einoun junction, east of Hebron.

It is worth mentioning that the army has kidnapped more than 10 Palestinians, on Thursday at dawn, from their homes in different parts of the Hebron district, and