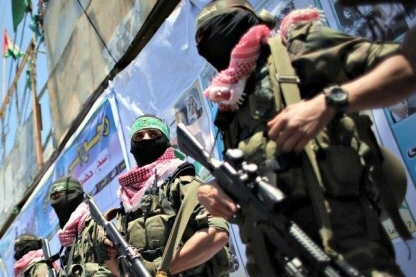 The sources said that the charges of collaboration included spying on fellow Palestinians, handing over vehicle and residence information to Israeli officials, and obtaining arms with the intention of assassinating Palestinian officials.

Under Palestinian law, willful, premeditated murder and treason as well as collaboration with the enemy — usually Israel — are punishable by death.

All execution orders are supposed to be approved by the president before they can be carried out, but such approval is sidestepped by Hamas, who does not recognize the legitimacy of Fateh leader and PA President Mahmoud Abbas.
European Union missions based in the occupied Palestinian territory condemned, in August of 2015, the use of capital punishment by Palestinian leadership.

The EU called on authorities in Gaza — run by the Hamas movement — to refrain from enforcing capital punishment on the grounds that the practice is cruel, inhumane, fails to deter criminal behavior, and denies citizens human dignity.

In August 2014, 18 suspected collaborators were killed by Hamas when the group announced a crackdown on Palestinians alleged to be working with Israel.

The Palestinian Center for Human Rights (PCHR) at the time reported over 160 death sentences had been issued by Palestinian courts since 1994. Over 80 percent of the sentences were carried out in the Gaza Strip, the remainder taking place in the occupied West Bank in courts run by the Palestinian Authority.