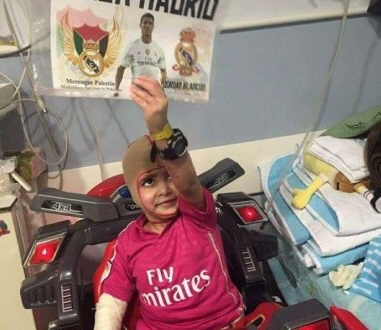 Real Madrid football club, on Wednesday, said that they have invited the arson attack survivor, five-year-old Ahmad Dawabsha, to visit the team and meet star player Cristiano Ronaldo.Ahmad is the only member of the Dawabsheh family who survived the Israeli terrorist arson attack on his home in Douma, near Nablus, northern West Bank, which killed his 11-month-old brother, Ali, and both his parents.

Ahmad is still recovering from third-level burns in the hospital and doesn’t know what happened to his family.

Team spokesman Raul Serrano Quevedo said, according to World Bulletin/PNN, that the team sent an official request to the Palestinian Embassy to organize a meeting between Ahmad Dawabsha and Cristiano Ronaldo.

He said details are still being worked out, and it’s not clear when Ahmad will visit.