List of 158 Palestinians Killed by Israeli Troops Since October 1st 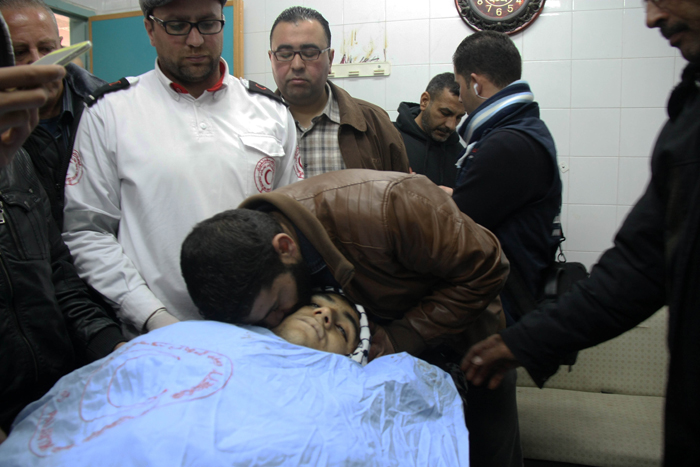 The following is a list of names of all Palestinians shot and killed by Israeli fire in the occupied West Bank, including Jerusalem, and the Gaza Strip, including one in the Negev, in the period between Thursday October 1st and Friday January 15th, as confirmed by the Palestinian Health Ministry.
1. Mohannad Halabi, 19, al-Biereh – Ramallah. Shot after allegedly grabbing gun and killing two Israelis. 10/3

117. Mohammed Saba’nah, 23. Shot to death on the main road to Nablus, near Huwwara checkpoint. Israeli troops claimed he ‘had a knife’. 12/27

118. Nour al-Deen Saba’nah, 17, Shot to death on the main road to Nablus, near Huwwara checkpoint in same incident. From Qabatya village, southeast of Jenin. 12/27

125. Khalil Mohammed Shalaldah, 16, killed at Beit Eynoun checkpoint, east of Hebron – brother of Mahmoud Mohammad Shalalda , who was killed by the Israeli army on November 13, 2015. 1/7

126. Ali Abu Mariam (Ali Mohammed Hajj Mohammed), 26 from al-Jadeeda village near Jenin, a third year student at al-Quds Open University, killed at al-Hamrah checkpoint, southeast of Tubas, when Israeli soldiers were searching cars and made a claim of an ‘attempt to stab’ them, but provided no evidence of that claim. 1/9

143. Rahaf Yahya Hassan, two years old. Killed along with her mother in an Israeli airstrike. 10/11

155. Yousef Abu Sbeikha al-Boheiri, 48 – al-Boreij Camp – died after Israeli forces shot him two days before, while he was working on his farmland. 12/28

158. Mohammad Majdi Qaita, 26, killed in Khan Younis during protest in which Palestinians tried to dismantle part of the Israeli Wall. 1/15

Also, during the police intervention in the 12/23 stabbing near Damascus Gate, Ofer Ben-Ari, 46, was accidentally shot by police.