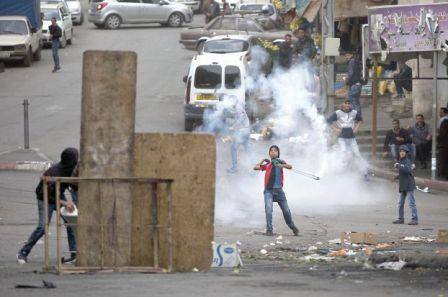 Israeli soldiers shot and injured, Friday, four Palestinians near the northern entrance of the West Bank city of Bethlehem, and at the eastern entrance of Teqoua’ town, southeast of the city.Red Crescent medics said one Palestinian youth was shot with a live round, and was moved to the local clinic in Teqoua’.

In addition, the Red Crescent said three Palestinians were shot with rubber-coated steel bullets, and many others suffered the effects of tear gas inhalation, after the soldiers attacked Palestinian protesters at the northern entrance of Bethlehem city.

The soldiers fired several live rounds, rubber-coated steel bullets and gas bombs at the Palestinians as they marched against the ongoing occupation and military escalation in different parts of occupied Palestine.

Also on Friday, the soldiers killed two Palestinians; one during an invasion into the al-Boreij refugee camp, in central Gaza, and one Palestinian during a protest in Khan Younis, in the southern part of the coastal region.