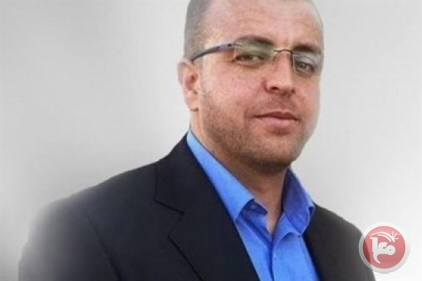 Palestinian prisoner Muhammad al-Qeeq stopped taking vitamins on Thursday, as he entered the 51st day of a hunger strike which he began to protest his detention without trial, the Palestinian Prisoners Society (PPS) said.Qadura Fares, head of the prisoner’s society, told Ma’an that al-Qeeq, a 33-year-old journalist from the southern West Bank town of Doura, had decided to stop taking to vitamins in order ‘to put pressure on the Israelis.’
Fares said the decision also marked al-Qeeq’s determination to go on with his hunger strike, despite the continued deterioration of his health.

After visiting the prisoner in HaEmek Medical Center in Afula, a lawyer for the society, Jawad Boulos, said that al-Qeeq was now in critical condition, suffering severe weakness, muscles pains, and eye trouble.
Boulos said that one of al-Qeeq’s hands and one of his feet were handcuffed to the hospital bed, and that he was being watched by six prison guards.

He added that a number of doctors from the Israeli Prison Service visited al-Qeeq on Thursday to evaluate his condition.

The Palestinian Authority Committee for Prisoners’ Affairs warned earlier in the week that the Israeli authorities may be preparing to force-feed al-Qeeq, in what would be the first use of a controversial practice approved by Israeli lawmakers last year.

However, Physicians for Human Rights Israel, which has been closely following al-Qeeq’s case, said on Wednesday that doctors at HaEmek Medical Center had ‘no intention’ of force-feeding him.

A spokesperson for the group said the medical center’s ethics committee had assured them of their refusal to go through with force-feeding, which the Israeli Medical Association considers tantamount to torture.

Fares also said that PPS did not believe Israel would go ahead with the practice. ‘The doctors continue to refuse this law,’ he said. ‘Without a doctor, it will not be implemented.’

Fares said that, as of Thursday, the Israeli Prison Service (IPS) had given no indication that it was willing to negotiate with al-Qeeq, although he expressed hopes that their position may change in coming days.

Al-Qeeq, a journalist with Filistine al-Yawm and father of two, began his hunger strike on Nov. 24 to protest his administrative detention — internment without trial or charge.

Administrative detainees are held on secret evidence and are not aware of the reason for their detention, which can be renewed indefinitely in six-month periods.

Israeli officials have in the past claimed that administrative detention is an essential tool in preventing attacks and protecting sensitive intelligence by allowing them to keep evidence secret.

However, the practice has been strongly criticized by the international community, which says that international law allows for such detention only under extreme circumstances, whereas Israel uses it as a punitive measure on a routine basis to circumvent the justice system.

Numerous Palestinian prisoners have gone on hunger strike to protest administrative detention, including several last year who were able to secure their release from Israeli custody following grueling hunger strikes.
These included Khader Adnan, who was released after 56 days on hunger strike, and Muhammad Allan, after 66 days. Both hunger strikes brought the prisoners close to death.

According to prisoners’ rights group Addameer, 660 Palestinians were held in administrative detention as of December.