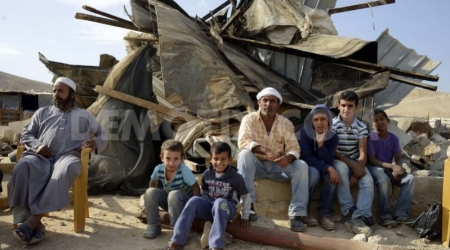 The Israeli Supreme Court refused to reconsider a decision to demolish the unrecognized Bedouin village of Umm al-Hiran, and ordered to evict all its residents, Adalah center reported on Sunday.Adalah, the legal center for Arab minority rights in Israel, reported that the Supreme Court rejected its extraordinary motion for a second hearing on the case. They requested that the court reconsider its decision to approve Israel’s plane to evict the village’s 1,000 Palestinian Bedouin residents, in order to build Jewish town of Hiran, and expand the Yatir Forest over its ruins.

The Court’s refusal to reconsider its May 5 2015 ruling effectively means that the eviction and demolition procedures against the village can proceed.

In response to the decision, Adalah emphasized, according to Al Ray, that ‘The Court, today, wrote yet another chapter – the fourth, to be precised – in the history of expulsion and displacement of the Bedouin families since 1948, despite the fact that they were moved to these villages by the Israeli military government in 1956.’

Adalah added: ‘The Court’s decision legitimized Israel’s longstanding policy against Palestinian citizens of Israel – a colonial policy rooted in an ideology of racial discrimination, segregation, and dispossession. The residents of Atir-Umm al-Hiran are now clinging to their existential, moral, and legitimate right to continue living on their land. They will continue their just struggle. Further discussions will be held in the coming days to plan the next steps of that struggle.’

In related news, Israeli forces demolished, at dawn on Monday, three shops in the village of Kharbatha al-Misbah, west of Ramallah, under the pretext of building without permit.

Local sources said that forces demolished a vehicle repair shop belonging to Jamal Daraj, a room used by the citizen Hamdi Krekar to sell foodstuffs, and a quarry owned by Ahmed al-Habeya.

It is noteworthy that these shops are located near the street (443) settlement, which was held near the village by force.