Army Kidnaps Three Palestinians In Nablus, One In Tulkarem And One In Bethlehem 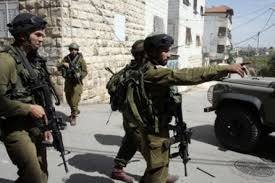 The kidnapped have been identified as Zakariyya Maher Hamayel, 20, from Beta village, as he was standing at the village’s main junction, in addition to Eyad Nayef Odeh from Huwwara town, and Mohammad Yassin from Aseera al-Qibleyya, south of Nablus, after the army invaded and searched their homes.

In addition, the soldiers invaded the southern neighborhood on the northern West Bank city of Tulkarem, and kidnapped Wisam Issam Odeh, after invading his family’s home and searching it. His father said the soldiers also ransacked the property while interrogating the family.

Furthermore, the several military jeeps invaded the West Bank city of Bethlehem, and kidnapped a young man, identified as Omar Samir Shallash, 24, after invading and searching his home.

Also on Tuesday at dawn, dozens of Israeli military vehicles invaded the town of Ya’bad, southwest of the northern West Bank city of Jenin, searched many homes, confiscated mobile phones and a computer, and kidnapped five young men.