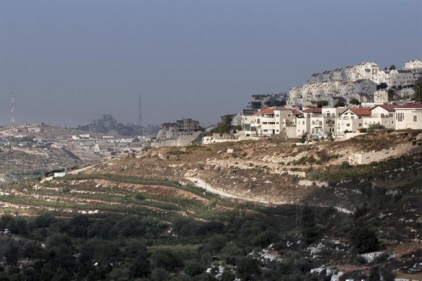 ”As of today, Palestinian workers cannot enter Israeli communities in Judea and Samaria,” the spokesperson said, referring to the occupied West Bank. The duration of the ban could not be confirmed, but the spokesperson said that the “situation” would be “reviewed on a daily basis.”

The measure will impact around 11,000 Palestinian laborers who work in settlements in the West Bank — around 2 percent of the working Palestinian population, according Palestinian policy network Al-Shabaka.
The Israeli army told Israeli daily Haaretz prior to the implementation of the ban that the decision was “not ‘collective punishment,’ but necessary to maintain order inside settlements.”

The suspected attacks were the latest in a wave of unrest that escalated across the occupied Palestinian territory in October.

Over 20 Israelis have been killed in attacks carried out by Palestinian individuals since Oct. 1. This week’s incidents inside of illegal settlements came as the majority of attacks this month took place on military personnel near checkpoints.

Israel barred Palestinian laborers from the Gush Etzion settlement bloc in November, after an Israeli settler was stabbed to death in the area.

The ban was one of several measures since violence increased in October to be implemented by the Israeli army on Palestinian communities in the occupied Palestinian territory, including road closures, sealing off movement in and out of villages and towns, and arrest campaigns.

The Israeli army Chief of Staff Lt. Gen. Gadi Eisenkot said, Monday, that “it would be a bitter mistake to impose curfews and closures” on Palestinian communities, adding that such moves would “work against Israeli interests,” Haaretz reported.

While “security measures” have been eased over the past month according to documentation by the UN Office for the Coordination of Humanitarian Affairs, many closures and restrictions on movement remain in place, particularly in the Hebron district.

Archive IMEMC story: 12/06/15 Netanyahu to Kerry: Israel Will Not Be A ‘Bi-national’ State