Soldiers Kidnap 12 Palestinians In The West Bank, 31 Since Dawn 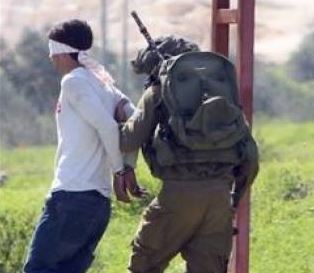 It added that the soldiers also kidnapped Tawfiq Yacoub Hanania, his brother Maher, and Hussein Ahmad Abdul-Nabi, 19, from the West Bank city of Bethlehem.

Another Palestinian, identified as Mohammad Sho’ani, was taken prisoner from his home in the Qalandia refugee camp, north of occupied Jerusalem.

In Nablus, in the northern part of the occupied West Bank, the soldiers kidnapped ‘Ala Salem Bani Shamsa and Eyad Nayef Odeh, while residents Mahmoud Mousa Sa’id and Haitham Aqra’ were taken from on the Za’tara roadblock, south of Nablus.

On Wednesday at dawn, the soldiers kidnapped nineteen Palestinians, after invading and searching their homes, in different communities in the West Bank, including Jerusalem.