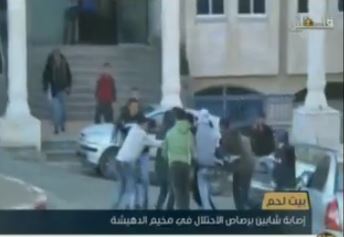 Palestinian sources have reported that dozens of Israeli soldiers invaded, on Thursday at dawn, various communities in the West Bank district of Bethlehem, injured two and kidnapped eight others.Mohammad Abu Rayyan, the deputy head of the Red Crescent’s Emergency Unit in Bethlehem, said the soldiers shot, in the Deheishe refugee camp, two Palestinians with live rounds in their thighs, before local medics rushed them to Beit Jala and the al-Yamama hospitals in Bethlehem.

Eyewitnesses said the invasion was carried out by dozens of soldiers, and undercover officers, leading to clashes with local youths, who hurled stones and empty bottles on them.

The clashes were largely concentrated at the main entrance of the refugee camp.

The soldiers fired live rounds, gas bombs and concussion grenades, and occupied rooftops of many homes, before using them as monitoring towers.

In addition, the soldiers invaded the al-‘Arouj village, east of Bethlehem, searched and ransacked homes, an kidnapped four Palestinians identified as Rabe’a Mustafa al-‘Arouj, 27, (wife of a political prisoner identified as Ismael al-‘Arouj), Fidda (his mother), 52, in addition to his brothers Mohammad, 30, and Ja’far, 29.

On Thursday at dawn, the army invaded several areas in the northern West Bank district of Nablus, injured three Palestinians and kidnapped another.

On Wednesday at night, one Palestinian was kidnapped, and three others suffered moderate wounds, after Israeli soldiers invaded the central West Bank city of Tubas, and clashed with local youths.

On Wednesday evening, the soldiers kidnapped a young man at the Beit ‘Anoun junction, east of Hebron.