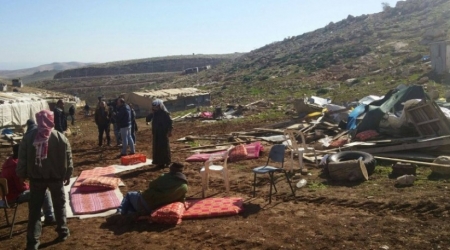 Israeli forces demolished, at dawn on Thursday, three Bedouin houses in the al-Baba mountain area, in the town of al-Ezariya, located east of occupied Jerusalem.Local sources reported, according to Al Ray Palestinian Media Agency, that Israeli bulldozers began the demolition at dawn, under the protection of the occupying forces; women and children were left outside in extreme cold temperatures.

The area of the neighborhood is approximately 1,000 dunams and contains dozens of small houses for about 350 Bedouin residents, as well as a kindergarten.

The 40 Bedouin families of this neighborhood belong to the al-Jahalin tribe, which was evicted from the Negev by Israeli forces in the 1950s, and displaced again after the 1967 war, to finally settle in the al-Baba Mountain region.

Israel aims to demolish the neighborhood ahead of land confiscation plans, in preparation for the expansion of the Israeli settlement of Maale Adumim, and to extend the apartheid wall.