Undercover Soldiers Injure One Palestinian, Kidnap Him And Two Others, In Bethlehem 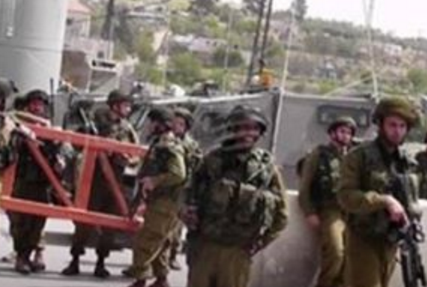 Undercover soldiers of the Israeli army infiltrated, Friday, into the northern part of the West Bank city of Bethlehem, shot and injured one Palestinian youngster, and kidnapped him, along with two others. Another Palestinian was also injured, and many suffered effects of tear gas inhalation. Red Crescent medics said the soldiers shot a Palestinian, near Jasser Palace Hotel, after they infiltrated local protesters. The Palestinian was shot in his leg before the soldiers took him to an unknown destination.

The undercover officers also assaulted two other Palestinians, repeatedly struck them on various parts of their bodies, mainly on their heads, and abducted them.

Another Palestinian was shot with a rubber-coated steel bullet in his leg, before Palestinian medics took him to the Beit Jala governmental hospital.

Many Palestinians also suffered the effects of tear gas inhalation after the soldiers fired dozens of gas bombs at the protesters, and several homes.

In related news, several Palestinians have been injured, after Israeli soldiers invaded Nabi Saleh village, northwest of Ramallah, and attacked the weekly nonviolent protest. The soldiers also closed the village, and prevented the Palestinians from entering or leaving it.

In related news, three Palestinians, including a child, were injured after Israeli soldiers invaded Kafr Qaddoum village, near the central West Bank city of Qalqilia, and attacked the weekly protest.

In addition, the Popular Committee in Bil’in, near of Ramallah, has reported that one child was shot with a rubber-coated steel bullet in the head, and dozens of Palestinians suffered the effects of tear gas inhalation, after Israeli soldiers assaulted the weekly nonviolent protest.