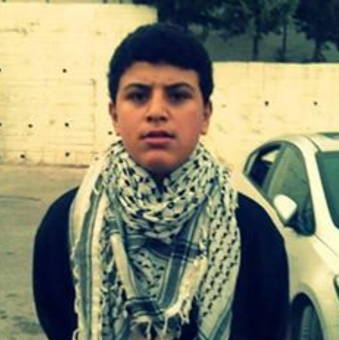 The Ofer Israeli military court ordered on Sunday that the wounded detained Palestinian child Ahmad Omar al-Atrash, 13, should remain under interrogation until Thursday. The Palestinian Detainees’ Committee noted that Israel is holding captive at least 450 children, including some who were injured prior to their abduction.The Israeli court refused to allow the parents of the child to hug him, or even to talk with him. The boy’s lawyer challenged that refusal, and the child’s parents were later allowed to be with him for a few minutes.

Al-Atrash, from the Deheishe refugee camp in Bethlehem, was shot and injured by Israeli undercover soldiers near the northern entrance of Bethlehem city, before they grabbed him, and took him to an unknown destination.

His family was not informed about his abduction, and had to make calls to various groups, including the Red Cross, trying to determine his whereabouts.

The Detainees’ Committee said Palestinian children remain a target for the Israeli military, pointing out that there are 450 children who are imprisoned, including dozens who were shot and injured prior to their abduction.

The children, like adult detainees, face very difficult living conditions, in addition to torture and humiliation by the soldiers and interrogators – without the presence of parents or attorneys, and in violation of international law.

The head of the Detainees’ Committee, Issa Qaraqe, said that Israel appears to consider itself in a “war with children,” and should be listed on a “list of shame” for its ongoing escalating violations against children.

Qaraqe said the Israeli army abducted more than 2250 children in the year 2015, and that most of those children were subjected to torture, abuse and harsh living conditions.

“Israel is the only country in the world that legislates not only the incarceration of children, but also the use of military courts to convict children,” he said, “It also passed laws allowing judges to issue verdicts to imprison those children for many years, up to 25.”

He also stated that the United Nations needs to act fast, and provide the needed protection to the Palestinian children, especially amidst escalating Israeli violations, including physical and psychological torture.