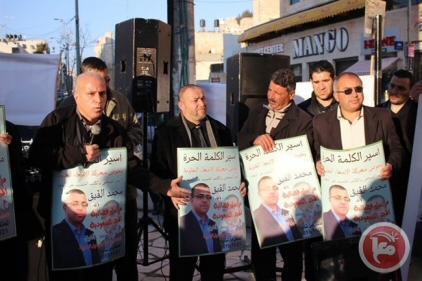 Dozens of Palestinian journalists demonstrated on Sunday morning, in front of the UN High Commissioner for Human Rights office in Gaza City, in solidarity with hunger striking journalist Muhammad al-Qeeq.The demonstration, organized by Gaza’s union of journalists, was held in hopes to urge the international community to put pressure on Israel to free the imprisoned journalist.

33-year-old al-Qeeq began his hunger strike on November 25, in protest of being held in Israeli prison under administrative detention without charge or trial, for reasons he believes are tied to his work as a journalist.

While evidence against al-Qeeq is still being withheld, Amnesty International reported, according to Ma’an, that the military judge at Ofer Military Court said the file against him “accuses him of ‘incitement,’ of working with media associated with Hamas, a Palestinian political faction with an armed wing, and also of being a ‘threat to the security of the area.’’

Mahmoud Ulayyan, a member of Gaza’s journalism union, said he believes al-Qeeq is inarguably being held due to his work as a journalist, and that Palestinian journalists urgently need protection from the ‘continuous Israeli violations’ launched against them.

On Saturday, Amnesty International demanded that Israel either release or charge al-Qeeq, who the group said has been mistreated and tortured in ways that violate international law.

Amnesty said Israeli authorities have “undertaken a number of measures aimed at pressuring him [al-Qeeq] to end the hunger strike, some of which violate the prohibition of torture and other ill-treatment.”
The rights group said Israel must “immediately cease all non-consensual medical treatment and other punitive measures” against al-Qeeq, whom the group said should be released unless he is charged with “an internationally recognizable criminal offense.”

After being transferred to a hospital at the end of December ,due to his deteriorating health, Physicians for Human Rights Israel (PHRI) revealed that Israeli authorities had forced medical treatment on al-Qeeq.

Following a visit by a PHRI lawyer to al-Qeeq in HaEmek Hospital, the group said the hunger striker had been ‘hooked up against his will to an infusion of salts and vitamins, and that blood was taken with the permission of the hospital’s ethics committee.

‘Al-Qeeq was tied to the bed and forcefully held down by prison wardens while a member of the medical staff made the infusion. For four days al-Qeeq remained tied to the bed, hooked up to the IV drip, while pleading for its removal, to no avail,’ according to PHRI.