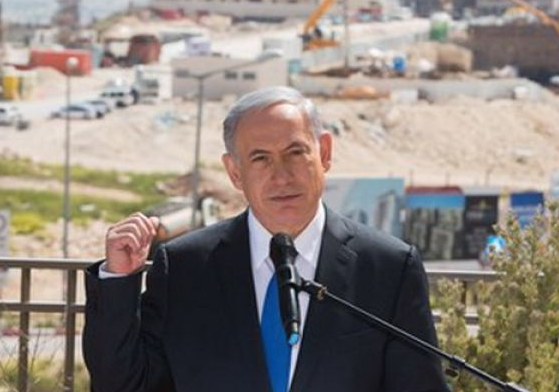 Israeli Prime Minister Benjamin Netanyahu vowed, during the Sunday government meeting, to support settlement activities in the occupied Palestinian territory, including Jerusalem, and to seek ‘a legal process to allow the settlers to return’ to the two Hebron buildings they were evicted from, Thursday.His statements about the ‘evicted settlers in Hebron’ refer to the two buildings they occupied, Thursday, near the Ibrahimi Mosque, in the southern West Bank city of Hebron.

Israel said the two buildings will remain shut “until the court reaches a final decision regarding their ownership.”

The eviction caused Netanyahu’s coalition partners, especially extreme right wing factions, to lash out on him and his Defense Minister Moshe Ya’alon, who ordered the removal of the settlers.

Netanyahu said the eviction was a legal issue, and that he will always support all settlement activities in the occupied West Bank, including Jerusalem.

He added that the legality of the ‘purchase of the two homes is being examined,’ adding said once his government examines ‘the purchase documents’, and approves it, the settlers will be allowed back, and reiterated his government’s support of all settlement activities.

‘Should the legal process take more than a week, it will be presented to the ministerial cabinet for deliberation,’ he said.

Netanyahu faced strong criticism from his extreme right-wing coalition partners, and ministers, after the army removed the settlers.

The settlers stormed and occupied the two Palestinian homes in Hebron, last Thursday, while throwing stones and hurling insults on the Palestinians.

The homes belong to Fawwaz Qafisha, Shams al-Zatari, and Hussein al-Zatari on al-Sahla Street, near the Ibrahimi mosque, in Hebron.

The army said the eviction came because the alleged purchase was never verified, and because the setters moved in without the approval of the military, the political and security leadership in the country.

Israel’s colonies in the occupied territories, including in East Jerusalem, are illegal under International Law and the Fourth Geneva Conventions, to which Israel is a signatory.

They are largely built on private Palestinian property, while many are built on what Israel classifies as “state lands.”

Article 4, paragraph six, of the 1949 Fourth Geneva Convention says, ‘the occupying power shall not deport or transfer parts of its own civilian population into the territory it occupies.’

Article 85(4)(a) of the Additional Protocol of 1977, reiterates Article 4, and states that ‘the transfer by the occupying power of parts of its civilian population into the territory it occupies is a grave breech of the protocol.’

In addition, the ICC Statute (International Criminal Court) states that ‘the transfer, directly or indirectly, by the occupying power of parts of its civilian population into the territory it occupies constitutes a war crime in international armed conflicts.’