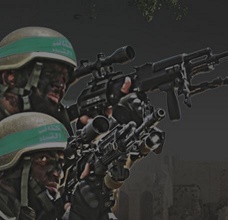 After the tunnel collapsed, al-Qassam announced it lost communication with what it called an “elite unit,” while it members were in the tunnel.