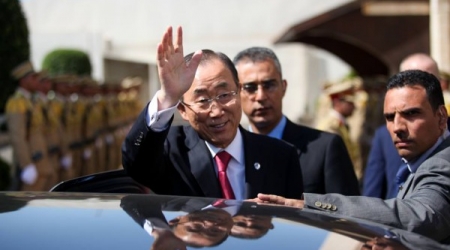 Israel has accused UN Secretary-General Ban Ki-moon of encouraging ‘terror’ by suggesting that alleged knife attacks by Palestinian youth were a natural reaction to Israel’s heavy-handed occupation.’The UN lost its neutrality and moral force a long time ago and the secretary-general’s remarks do not improve the situation,’ Israeli Prime Minister Benjamin Netanyahu said Tuesday.

‘The Palestinian murderers do not want to build a state — they want to destroy a state,’ he added.
Israel insists that an ongoing wave of violence seen since last October — in which more than 160 Palestinians have been shot dead by Israeli forces after alleged attacks or during protests — was the result of ‘incitement’ on social media.

Over the same period, 30 Israelis and foreigners have been killed in the violence, Anadlou/Al Ray reports.

Ban, for his part, speaking at a meeting of the UN Security Council, attributed the violence to mounting Palestinian frustration and a stalled peace process.

‘It is human nature to react to occupation, which often serves as a potent incubator of hate and extremism,’ the UN chief said.

“Progress towards peace requires a freeze of Israel’s settlement enterprise,” Ban said in an address to the UN Security Council’s periodic Middle East debate at the UN headquarters in New York, on Tuesday.

Ban also described the Tel Aviv regime’s continued settlement activities ‘an affront to the Palestinian people and to the international community.’

According to Press TV, the UN chief also expressed concern over plans by the Israeli regime to build over 150 new illegal settlements in the occupied West Bank and to confiscate 380 acres (154 hectares) of agricultural land in the Jordan Valley, near the West Bank city of Jericho.

“These provocative acts are bound to increase the growth of settler populations, further heighten tensions and undermine any prospects for a political road ahead,” he added.

Over half a million Israelis now live in more than 230 illegal settlements built, since the 1967 Israeli occupation.

The United Nations and most countries regard the Israeli settler units as illegal.

Ban’s comments were welcomed by Saeb Erekat, secretary-general of the Palestinian Liberation Organization, who called on the international community to pressure Israel to end its occupation.
‘Israel must be held to account for its actions if the international community wants to preserve the two-state solution [based on] on the 1967 borders,’ he said.

‘[Israel] carries out a plan to destroy the two-state option and replace it with a country with two systems of apartheid,’ Erekat added.

In recent months, Israel has become enmeshed in a growing war of words with the international community, which has recently stepped up criticism of Israeli policies vis-à-vis the Palestinians and settlement construction in the Israeli-occupied West Bank.

Swedish Foreign Minister Margot Wallstrom also drew Israeli ire, earlier this month, after calling for an investigation into whether alleged Palestinian attackers had been victims of extrajudicial murder by Israeli forces.

The biggest falling out, however, has been that between Israel and the EU after the latter approved new rules for designating imported goods produced in illegal West Bank settlements.

Israel, for its part, responded by threatening to bar the EU from playing a role in the stalled peace process.

– Anees Barghouti contributed to this report from Ramallah.