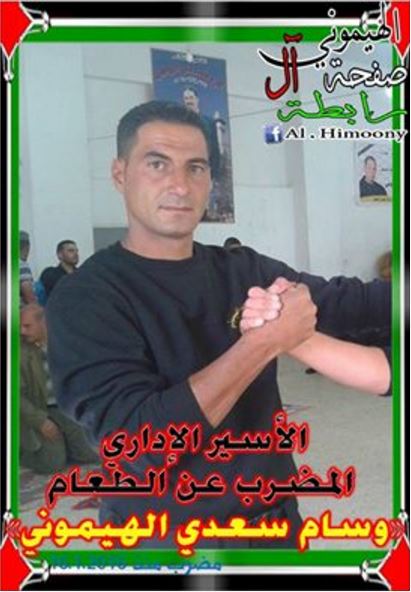 The family of Palestinian detainee, Wisam Sa’adi al-Haymouni, 36, has reported, Thursday, that their son started his hunger strike in the Majeddo Israeli detention center fifteen days ago, protesting his arbitrary Administrative Detention.The family, in the southern West Bank district of Hebron, said their son went on hunger strike after the army issued an Administrative Detention order against him, holding him captive without charges or trial.

Al-Haymouni was previously kidnapped and imprisoned by Israel five times, including his latest arrest on December 24, 2015.

After his abduction, an Israeli military court issued a four-month Administrative Detention order against him.

In related news, interrogators at the al-Jalama Israeli prison have decided to keep detained journalist, Mujahid Sa’adi, 38, under interrogation for eight additional days upon request of the Israeli Military Prosecutor’s office.

This is the third time Israeli renews the interrogation period of the imprisoned journalist, who previously spent more than five years in Israeli prisons, detention and interrogation centers.