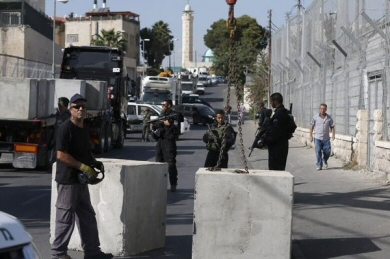 Israeli forces, on Thursday, closed a main road west of Ramallah city, which connects 20 villages to the economic and cultural hub, the mayor of Ramallah said.Ras Karqar Bahjat Samhan said Israeli troops closed the road with large concrete blocks without prior notice, preventing residents from being able to access Ramallah city, in the central occupied West Bank.
He added that the closure affects 45,000 Palestinians from 20 villages and neighborhoods from reaching their families, work, universities and schools.

A spokesperson with Israel’s Coordination of Government Activities in the Territories (COGAT) did not immediately respond for comment on the closure, according to Ma’an.

On Sunday, the mayor said Israeli forces also closed the road between Beit Owr junction and route 443 which separates five other villages from Ramallah city.

Roadblocks, temporary checkpoints, and security checks upon entrance and exit into many Palestinian villages and towns are among the increased restrictions that Israeli forces have initiated since a wave of unrest swept the region at the start of October.

Israel’s security cabinet in November 2015 gave the Israeli army the liberty to seal Palestinian villages in the occupied West Bank without first receiving approval from the government.

A senior Israeli official told Israeli daily Haaretz, at the time, that military commanders would be authorized to independently implement the total closures while “searching for suspected terrorists.”

The military was already carrying out the decision without such approval prior to the cabinet’s meeting, the report added.