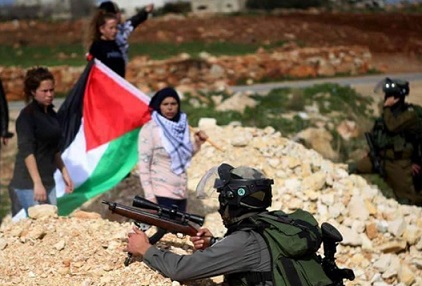 Israeli soldiers attacked, Friday, the weekly nonviolent protest in Nabi Saleh village, near Ramallah, and shot an international activist with a live round, while many protesters suffered the effects of tear gas inhalation.Morad Eshteiwy, coordinator of the Popular Committee in Nabi Saleh village, northwest of Ramallah, said the activist was shot in the leg, and was moved to a local hospital for treatment.

He added that many protesters suffered severe effects of tear gas inhalation, after the soldiers used excessive force.

Eshteiwy added that, for the second time in one week, the soldiers sealed the main entrance of the village, forcing hundreds of Palestinians from nearby villages and towns, to take longer, unpaved roads.

Also on Friday, dozens of protesters suffered the effects of tear gas inhalation, after Israeli soldiers attacked the weekly nonviolent protest in Bil’in village, near Ramallah.