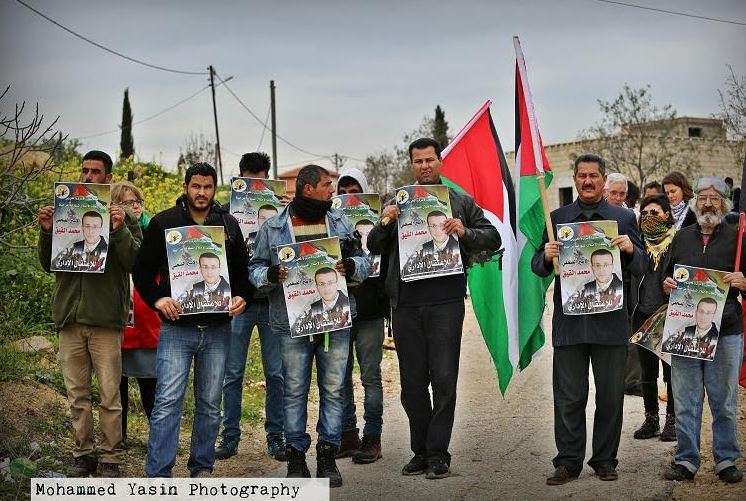 Dozens of nonviolent protesters suffered the effects of tear gas inhalation, Friday, after Israeli soldiers attacked the weekly nonviolent protest against the Annexation Wall and colonies, in Bil’in village, near the central West Bank city of Ramallah.The Popular Committee against the Wall in Bil’in has reported that the protest started from the center of the village, following noon prayers, and that, similar to previous protests, many Israeli and international peace activists marched with the Palestinians.

The protesters carried Palestinian flags, and posters of detainee Mohammad al-Qeeq, who continues his hunger strike for the 66th consecutive day, demanding his immediate release.

They demanded the release of all political prisoner, held by Israel, and chanted for the liberation of Palestine.

Abdullah Abu Rahma, coordinator of the Popular Committee in Bil’in, said the soldiers invaded the western part of the village, and fired dozens of gas bombs, targeting the nonviolent protesters and many homes, causing dozens to suffer the effects of tear gas inhalation.

Abu Rahma added that ‘Israel’s terrorist attacks against the Palestinians are ongoing, including killings, kidnappings and home invasions, in addition to isolating many villages and towns, and the illegal confiscation of lands.’

‘This is a systematic Israeli policy targeting the very existence of our people,’ he said, ‘These daily violations and crimes must end, and Israel should be held accountable.’